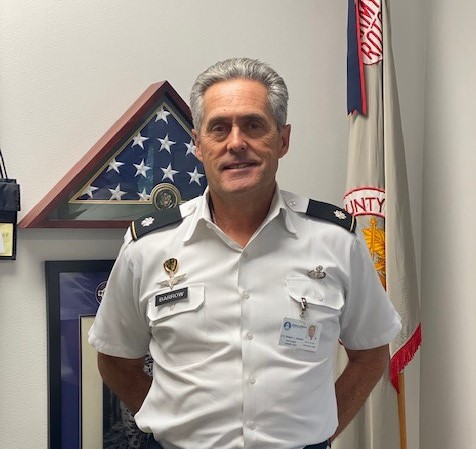 We at Mobile County Public Schools already knew our JROTC programs are led by the best, and now there is confirmation. LTC Robert F. Barrow, MCPSS Director of Army Instruction, has been named the JRTOC Director of Army Instruction of the Year. The award, announced by Major General John R. Evans, Jr., the Commanding General for the United States Army Cadet Command, is a nationwide honor that encompasses all JROTC leaders in the United States and at Department of Defense schools overseas.

Since assuming his current role at MCPSS in 2013, he has spearheaded the creation of the JROTC STEM Leadership Academy and the VEX robotics program. He has also been a leader in fitting JROTC under the Career and Technical Education umbrella statewide, incorporating STEM and engineering education with the traditional military-themed training.

LTC Barrow said credit goes to the leadership and the team at MCPSS and the support provided for JROTC and CTE programs.

“We can’t just be a fun program on the side. We’ve got to be educators with an emphasis on workforce development and citizenship,” he said. “JROTC can have such a profound impact, but we have to be willing to embrace education. How are you helping this child so that when they leave you, they’re going to be successful at the next level? That’s what it’s about.”

Larry Mouton, MCPSS Assistant Superintendent for Workforce Development, said it is "an honor" to work with LTC Barrow.

“His tireless effort to ensure that every JROTC student has a positive, life-changing experience has impacted thousands of students who have benefited not only from his programs, resource development and personal interaction, but also from the 'lead by example' lifestyle he exhibits," Mouton said. "Those of us who are blessed to work with him, and even those who have seen him in action, cannot help but increase our effort in developing the leaders of tomorrow.”